This ain’t your grandma’s pork chop recipe. You won’t be pairing these bad boys with apple sauce. Instead you are going to top that chop with a rich onion & bacon cream sauce. These will knock your socks off! 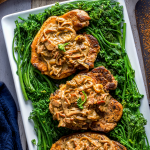 Check Out Our Sponsors

This website uses cookies to improve your experience. We'll assume you're ok with this, but you can opt-out if you wish. Accept Read More